What a Blessed Time for Trinity!

The One Hundredth Celebration Servicewas a thrilling event for our congregation.  were present for the worship.  The longest travel was from North Carolina – Glyn and Linda Nelson.  Written greetings came from as far away as California.
6 instrumentalists and 22 choir singers provided sacred music for the worship.
We welcomed Bishop Edward R. Benoway as our special guest participant in the Celebration Service.
We enjoyed a delicious banquet in Redeemer Hall.  Speeches followed.
The remodeling of Trinity is completed, and new carpeting graces our sanctuary! Trinity’s mission statement,

will be fulfilled for the next 100 years!

The Elite Five is now the Elite Six

We have discovered now that six of our Trinitarians were present for both the 50th and 100th Anniversaries: Bill Reichle, Jay Reichle, Esther Marshick, Marilyn Marshick, Craig Mowrer and Shirley Engler.   We salute all of you!

The banner/logo designed by Phil Rearick has been widely appreciated and admired. The design has many symbols which are easily accessible.

One special comment on the content. The design incorporates ELCA (Evangelical Lutheran Church in America). But do you know all the expressions of the Lutheran Church we have been a part of? Consider:

In each case, Trinity became a part of a larger and more diverse expression of the Lutheran Church. In each change, we joined in with a wider, more inclusive Body of Christ.

The logo also highlights the joining of Redeemer Church into Trinity and the enrichment of their presence. 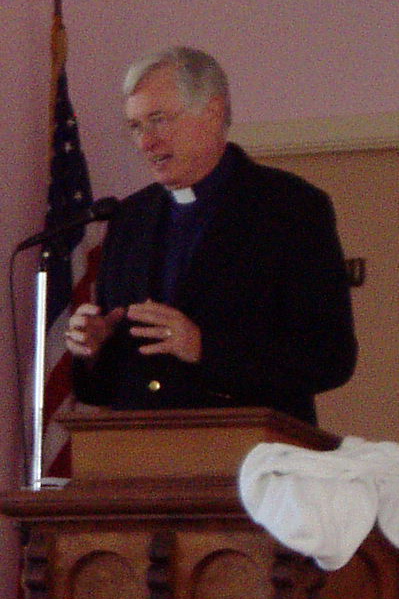 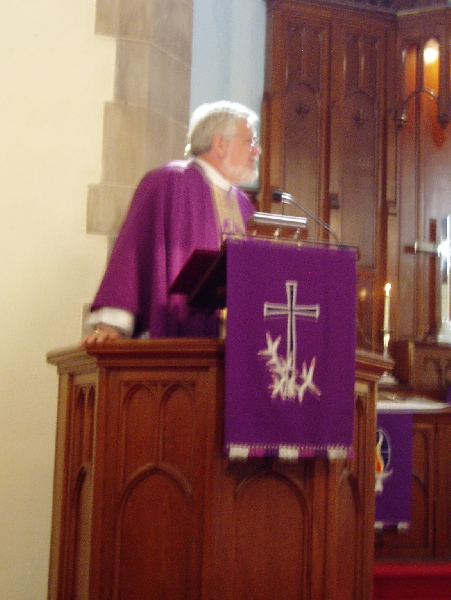 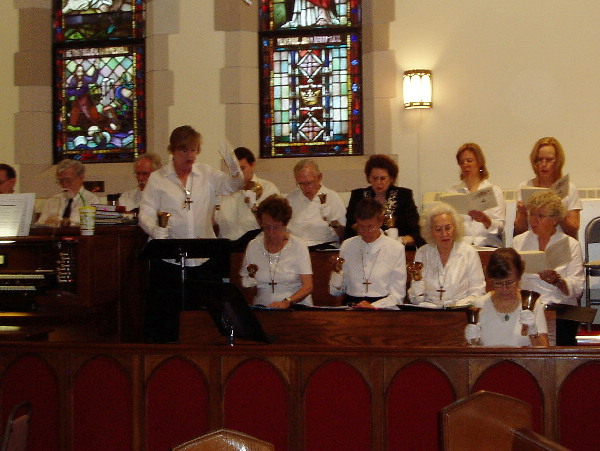 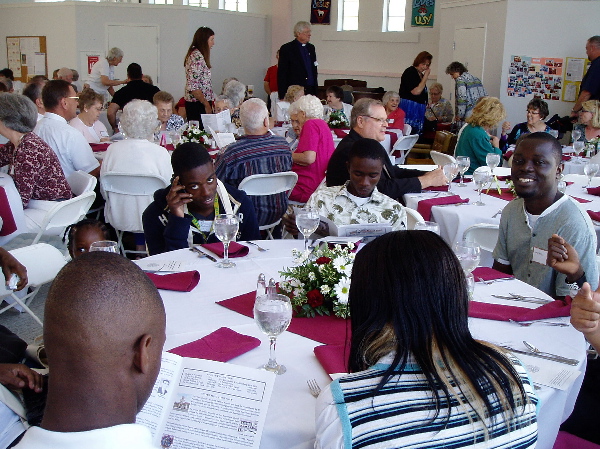 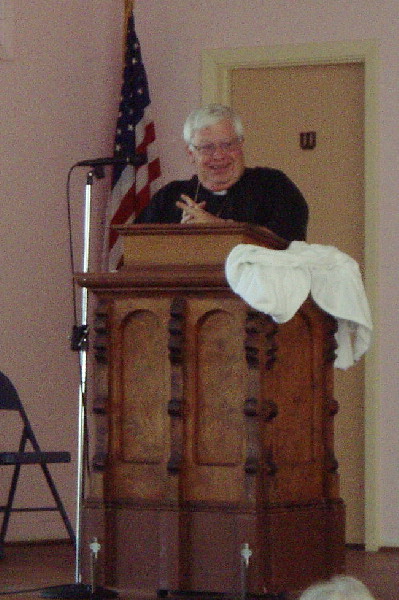 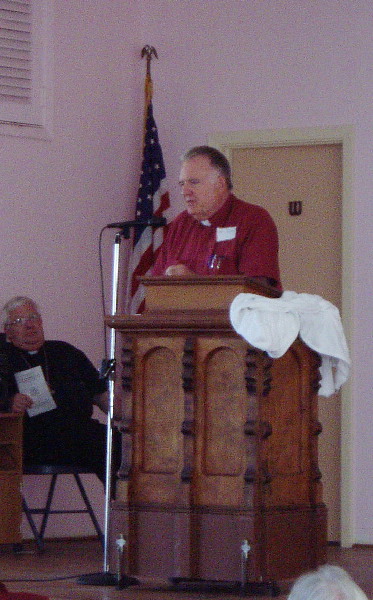 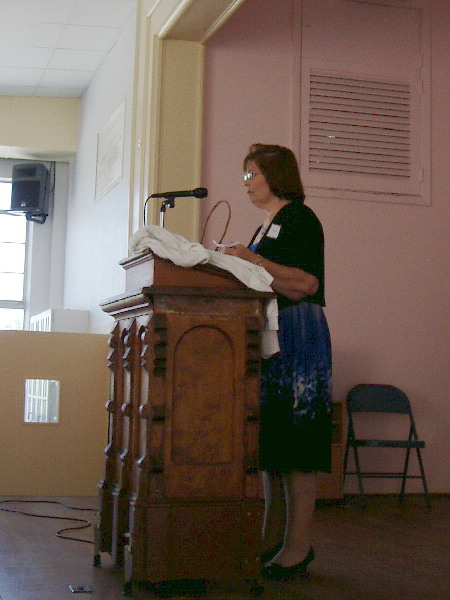 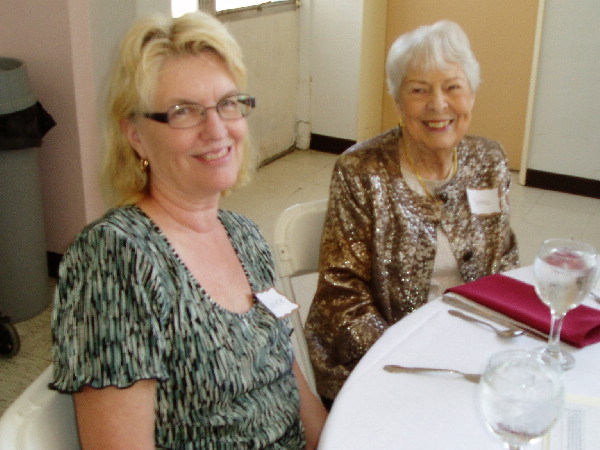 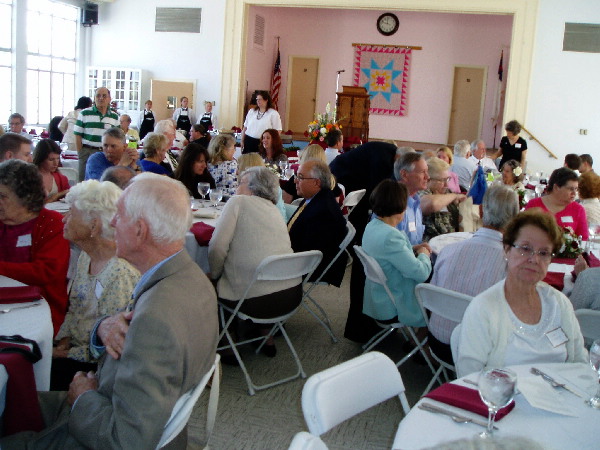 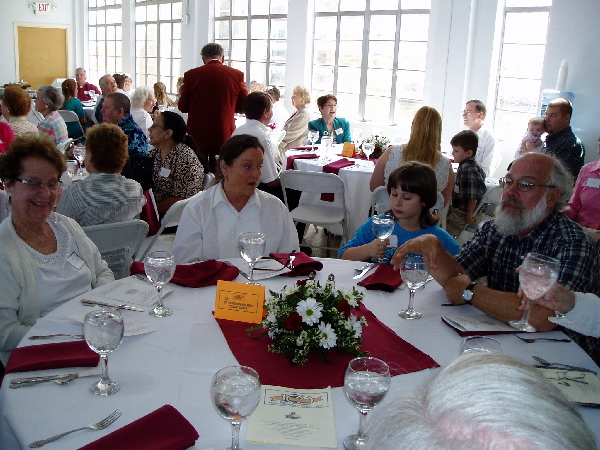 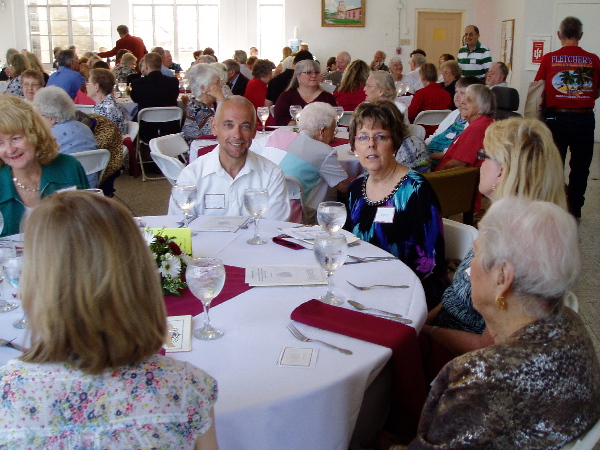 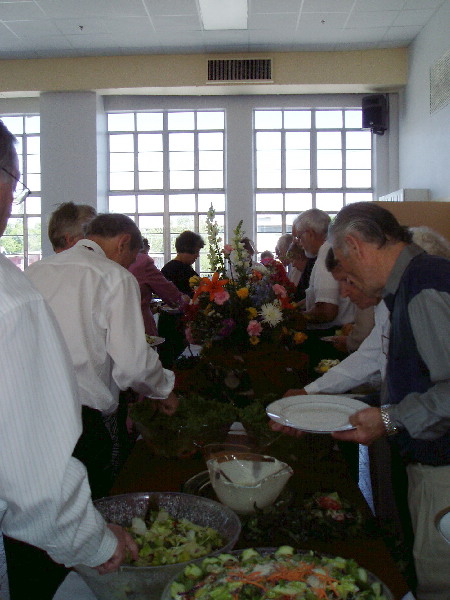 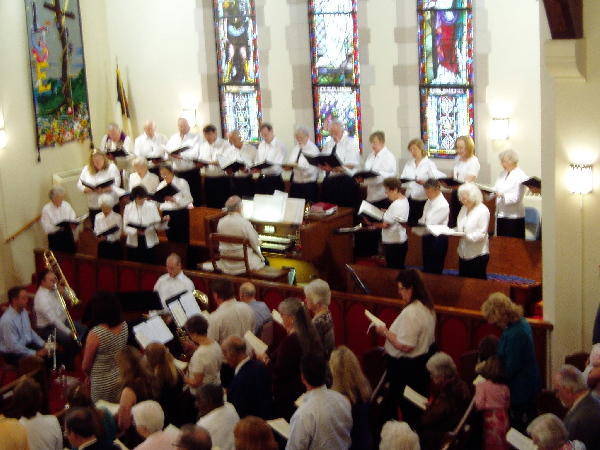 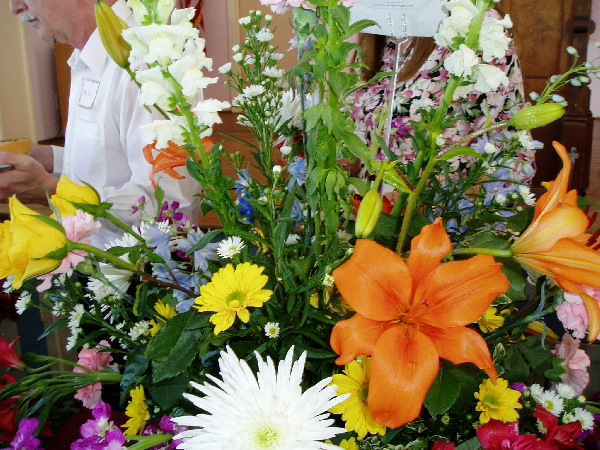 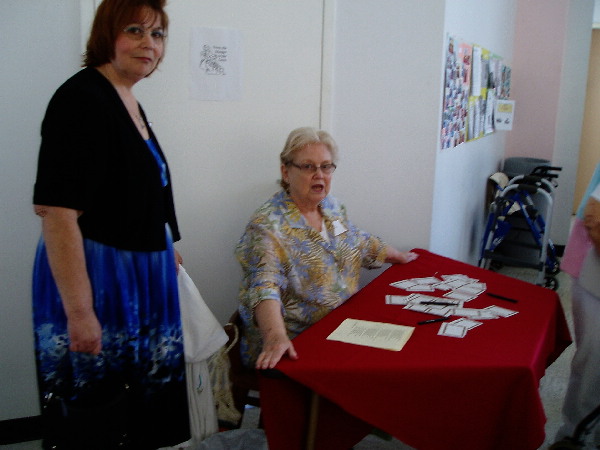 SPECIAL MUSIC FOR OUR 100TH ANNIVERSARY
The service included music from the sixteenth, seventeenth, eighteenth, twentieth and twenty-first centuries.  With the hymn tunes considered, the nineteenth century is also represented.
The celebration begins with gathering music at 9:45 a.m.  Please plan to come early and settle in to a good seat.  The gathering music will feature two canzoni for organ and brass by Giovanni Gabrieli(1555?-1612).  A canzona is an imitative musical form, more complex than a cannon but less developed than a fugue.
Gabrieli was most likely born in Venice.  He was one of five children. He probably studied with his uncle, the composer Andrea Gabrieli.  By 1584 he had become principal organist at the Basilica of San Marco in Venice. San Marco had a long tradition of musical excellence and Gabrieli’s work there made him one of the most noted composers in Europe.  Students from all over Europe came to Venice to study with him, including the important Lutheran composers Heinrich Schutz and Hans Leo Hassler. Though Gabrieli composed in many of the forms current at the time, he preferred sacred vocal and instrumental music.
His music is quite often performed at concerts by brass groups, and is a mainstay on classical music stations.  His works became increasingly popular in America after organist E. Power Biggs recorded many of them on location at San Marco with the Edward Tarr Brass Ensemble in the 1960’s and early 70’s.
The gathering music will also include a canzona for organ by Gabrieli’s younger compatriot, Girolamo Frescobaldi (1583-1643).  Born in Ferrara, Frescobaldi was an important composer of keyboard music in  early Baroque period. He was organist at St. Peter’s Basilica from July 21, 1608 until 1628 and again from 1634 until his death. His printed collections contain some of the most influential music of the 17th century.  Among his students was the Lutheran organist and composerDietrich Buxtehude as well as John Jacob Froberger.  Through these students Frecobaldi’s influence can be heard in the North German Stylus Fantasticus school of organ composition.
For the hymn of praise, we will celebrate the legacy of Redeemer Lutheran Church with a chorale concertato on I Know that My Redeemer Lives by Paul Bunjes (1914-1998).  A chorale concertato is a composition which treats each stanza of the hymn in a different way:  Some are for choir and congregation with brass, some for voices with organ, and some with various harmonizations for choir alone.  This piece will allow the congregation, choir, brass, and organ to join together in celebrating our Redeemer heritage.
Bunjes was one of the most highly respected church musicians and teachers of The Lutheran Church.  Born in Frankenmuth, Michigan, he received his education in the parish school at Frankenmuth, and attended Concordia Teachers College (now University).  In 1940 he attended Valparaiso University, where he received a bachelor’s degree. In 1944 he received a master of music degree from the University of Michigan, Ann Arbor. He received the doctor of philosophy degree in music theory from the Eastman School of Music  in 1966.  Bunjes joined the faculty of Concordia College in 1951 where he served as chairman of the music department from 1961 until 1977. He continued teaching until his retirement in 1981.
During his career Bunjes built a national reputation as an organ designer and architect.  Locally, he was the consultant for the Schlicker organ at Grace Lutheran Church.  His music is in use all over the world by congregations of many denominations.
The first anthem is The Old Hundredth Psalm Tune by Ralph Vaughan Williams.  This anthem was originally composed for the coronation of Queen Elizabeth II on June 2, 1953, and has become a standard.  (Our choir has sung The Old Hundredth Psalm Tune before, but never with so many voices or full brass quintet.)
Throughout his life, Vaughan Williams wrote sacred music, both vocal and instrumental.  He also composed hymn tunes, includingKing’s Weston (At the Name of Jesus), Sine Nomine (For all the Saints), and Down Ampney (Come Down, O Love Divine).  In addition, he adapted several traditional tunes as hymn tunes, including Ar Hyd Y Nos and Forest Green.
The anthem at the reception of the offering is Rise, O Church, Like Christ Arisen by John Ferguson (b.1941).  The anthem is based on the hymn tune Surge Ecclesia found at number 548 in the ELW.  Since 1983, Ferguson has been professor of organ and church music at St. Olaf college in Northfield, Minnesota, and is a frequent composer and editor of works published by Augsburg-Fortress, the ELCA publishing house.  He was previously on the faculty of Kent State University and organist-choirmaster at Kent United Church of Christ.
The festival postlude, played by the University of Tampa Brass Ensemble is Contrapunctus IX from The Art of the Fugue, byJohann Sebastian Bach (1685-1750).  The Art of the Fugue was composed in 1749-1750 and left unfinished at Bach’s death.  It consists of 18 cannons and Contrapucti (more or less a synonym forfugue), all based on the same subject, or theme.  It is unique in that Bach wrote out the parts without indicating any instrumentation.  It may thus be played on a keyboard instrument, or by a group of instruments.